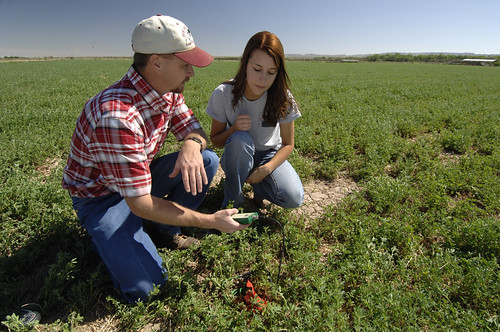 Clay Blackburn is a 25-year-old Missouri farmer who works several part-time jobs to keep his cow/calf operation growing. He currently leases 200 acres of land until he can build enough capital to buy.

“It’s tough for a young person to get started in farming,” said Blackburn. “Finding land is the most difficult thing, but I’m determined to eventually make this my full-time job.”

Blackburn’s experience mirrors that of many beginning farmers trying to get a foot in the door to owning and operating their own farm. Yet, data from the USDA’s Census of Agriculture and Agricultural Resource Management Surveys (ARMS) on beginning farmers and ranchers in the United States shows a steady decline over the past 20 years.

According to a report released yesterday by the U.S. Department of Agriculture’s Economic Research Service (ERS), between 1982 and 2007, the number of farmers who operated farms for less than 10 years declined along with the number of young principal operators. The report stated that 16 percent of all principal operators were under the age of 35 in 1982, but by 2007 that number dropped to 5 percent.

“Beginning farmers are a key to twenty-first-century agriculture,” says Agriculture Secretary Tom Vilsack. “These new agricultural entrepreneurs are the cornerstone to a vibrant rural America and to the future of all agriculture.”

Vilsack has been a champion of bringing more young people into farming by providing low-interest loans (such as the recently announced microloan program) and transfer programs geared toward the younger generation to help obtain farmland and build up their operation.

With the per-acre value of farm real estate averaging $2,650 in 2012 and some Northeastern states exceeding $10,000 per acre, according to ERS, many young people find it difficult to get into the business.

For Blackburn, leasing land was his best option, while taking out a direct loan with the USDA Farm Service Agency to buy livestock. “It was hard work and luck,” said Blackburn that helped him find land and buy about 60 cows and 100 head of sheep that he currently has as part of his operation. Blackburn works part-time assisting a veterinarian and also puts in part-time hours as a butcher and works at a loss adjustment agency.

“About 30 to 40 percent of my income comes from my operation,” said Blackburn. “I work the part-time jobs because they are flexible and allow me a chance to check in on my farm.”

He is not alone. On average, income obtained from jobs off of the farm accounted for 83 percent of farm operator household cash income in 2011, based on the report. Most families operating small farms have a negative net farm income.

Additionally, beginning farmers are more likely than established farmers to sell directly to consumers or local retail intermediaries than established farmers. Although less than 3 percent of beginning farmers sell to local retail intermediaries, when they do, they were more likely to make a profit than those that sold directly to consumers.

“Beginning farmers can’t get too excited and need to wait for the right opportunity,” said Jesus Limon, a farmer who has been in the business for more than 30 years. Limon immigrated to the U.S. from Mexico and began working on a farm as soon as he was old enough to earn some money. As a teenager, he earned U.S. citizenship and vowed to own his own farm by the age of 40 and not have to work for anyone else.

“By the time I was 30, I met my goal,” said Limon, who is now 55 and owns and operates an orchard in Washington State. “At that time a lot of farms were at reasonable prices, but it is the opposite now.”

Limon said beginning farmers and ranchers need to take their time and make sure farming is what they want to do. Then wait for the right time to buy land and get into the business.

“Be careful and don’t overpay for what you own. What is up now will eventually come down,” advises Limon. “It’s also pretty hard work, so if you don’t like farming, then don’t get into it.”