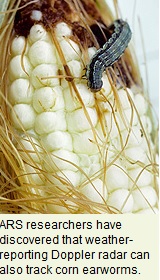 By US Dept. of Agriculture

Corn earworms, also known as cotton bollworms, migrate at night, making them notoriously hard to track. Farmers worried about controlling infestations have to make educated guesses about the pest’s movements, based on reports from other areas and past experience. Guessing wrong can be expensive: The pest costs cotton producers an estimated $200 million a year.

U.S Department of Agriculture (USDA) scientists in College Station, Texas, have shown that signals routinely collected by the National Weather Service’s (NWS) Doppler radar network could serve as an early-warning system to track corn earworms and other nighttime traveling pests.

With more than 150 ground-based installations across the United States, NEXRAD monitors weather conditions by sweeping the atmosphere every 5 to 10 minutes and reading the energy reflected by rain, snow and other precipitation. Algorithms normally remove energy reflected by flying insects, but scientists have used NEXRAD and other radar signals to track birds, bats, and insects.

Westbrook and Eyster obtained 15 days of NEXRAD data from the NWS installation at Brownsville, Texas, to see if they could use it to make aerial counts of corn earworm moths and determine their movement patterns during peak migration times from cornfields in the Lower Rio Grande Valley.

The researchers measured radar properties associated with aerial concentrations of moths at heights of up to 3,900 feet, using archived NEXRAD data collected in 1996. They compared it with data from the same time period previously collected by Wayne Wolf, a retired ARS agricultural engineer, with a scanning “X-band” radar system. Unlike NEXRAD, which is constantly operating, the scanning X-band system is specifically designed to track insects, but must be set up and monitored each time it’s used. NEXRAD data is publicly available and can be used without any positioning or monitoring cost, so it would be less expensive.

The results showed that NEXRAD was not only capable of tracking insect migration patterns, but also was superior to the X-band system because it offered a larger detection range and could determine the direction and speed of the insects. The results of this work were published in the International Journal of Biometeorology (April 2013).

More work is needed, but recent upgrades should make it easier to use NEXRAD radar to identify potential corn earworm infestations. Also, with refined algorithms, it should be able to track beet armyworms, grasshoppers, and other large-bodied