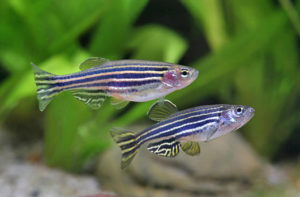 Defects linked to benzopyrene exposure passed down generationally in zebrafish

Zebrafish whose parents and grandparents were exposed to benzopyrene, a chemical associated with air pollution, suffer several physical and behavioral deficits, even though the descendant fish were not themselves exposed.

That’s the key finding from a new study led by researchers at Oregon State University that examined the generational effects benzopyrene exposure on zebrafish embryos. The result also sheds light on the effects of pollutants such as benzopyrene through epigenetics – the study of heritable changes in a chromosome that affect gene activity and expression.

The findings were recently published in the journal Toxicology and Applied Pharmacology. The National Institutes of Health and the OSU Superfund Research Program helped fund the research.
“There are detrimental effects on energy, behavior and heart rate in generations of fish never exposed to benzopyrene,” said Robert Tanguay, a molecular toxicologist in OSU’s College of Agricultural Sciences. “This suggests that contact with this chemical, even at low concentrations, during early embryonic development can produce long-lasting effects in succeeding generations.”

Benzopyrene is a polycyclic aromatic hydrocarbon, known as a PAH, which forms naturally as the result of almost any type of combustion, from a wood stove to an automobile engine, a cigarette or a coal-fired power plant. Many PAHs are associated with air pollution, are known to be carcinogenic and are the subject of extensive research at OSU and elsewhere around the world.

Zebrafish have been found in recent years to be an excellent model for biomedical research because they reproduce rapidly, and their embryonic genetics and biological systems bear many similarities to those of humans.

“If you compare the earliest stages in development of fish to people, they are almost the same,” said Tanguay, who directs the Sinnhuber Aquatic Research Lab at OSU.
The OSU researchers exposed zebrafish embryos to benzopyrene and then monitored their activities from larval stage to adult. They noted hyperactivity and memory deficits in fish they raised to adulthood.

They determined hyperactivity in the fish by how much they moved when their environment changes from a dark to light environment. To measure the fishes’ fitness, the research team measured their oxygen intake while swimming against a current. They weighed the fish to determine their BMI.
“Something happened in the genome of the exposed fish that caused the effects to persist to their children and great-grandchildren,” said Lisa Truong, an environmental toxicologist at OSU and one of the study’s co-authors. “It surprised us.”

There is a growing concern that a number of diseases and conditions that humans acquire as adults derive from environmental exposure during early embryonic development, Tanguay said.
“This takes that scenario to another level,” he said. “This leads us to believe that if our ancestors are exposed to benzopyrene during that critical embryonic period, there are changes in the genome that get passed on for multiple generations.”

The study was a collaboration of the OSU Superfund Research Program and the U.S. Department of Energy’s Pacific Northwest National Laboratory.