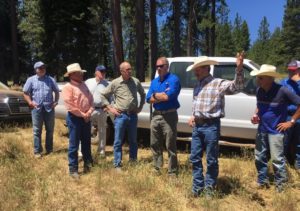 Southern Ore., – Announcing on twitter that he was “Glad to be back in Oregon! Here for a monument review…” the Oregon Cattlemen’s Association applauds Secretary Zinke for touring with OCA President John O’Keeffe and for hearing both sides of the issues of the Cascade-Siskiyou National Monument.

On April 26th, President Trump signed an Executive Order for the review of monument designations made under the Antiquities Act by previous Presidents. As many Oregon ranchers hoped, Secretary of the Interior Ryan Zinke, as designated by President Trump, made a trip to the Cascade-Siskiyou National Monument on July 15th, 2017, where he conducted a thorough and precise preview.

“Secretary Zinke’s trip to the Cascade-Siskiyou monument area is encouraging for all-natural resource industries,” said Jerome Rosa, OCA Executive Director. “The gross misuse of the Antiquities Act by prior administration will hopefully be overturned.”

Secretary Zinke met with members of Oregon’s Bureau of Land Management where he hiked through the monument, hearing all sides for his report. Meeting with various other industries such as the snowmobile industry, the timber industry and the ranching industry, it is reassuring that his attention to detail is precise to find the true impacts that a monument of this size can cause to the economy of our state.

OCA President John O’Keeffe spent the afternoon with Secretary Zinke and a few select others which included Lee Bradshaw, a rancher within the allotment, and Representative Greg Walden. O’Keeffe commended Secretary Zinke for the quality questions that he asked and his genuine concerns for all parties involved.

“He seems to be really interested and generally concerned with the issues that the monument raises,” said John O’Keeffe.

Overall, the monument review seemed to go well but there was no indication as to a timeline for what comes next or what Secretary Zinke’s final verdict will be. For now, the cattle ranchers will continue to wait. However, we are hopeful that, after researching and hearing about the negative impacts the Cascade-Siskiyou National Monument has had on outdoor enthusiasts, ranchers, and timber industries alike, that the right decision will be made.

The Oregon Cattlemen’s Association was founded in 1913 and works to promote environmentally and socially sound industry practices, improve and strengthen the economics of the industry, and protect its industry communities and private property rights.
###