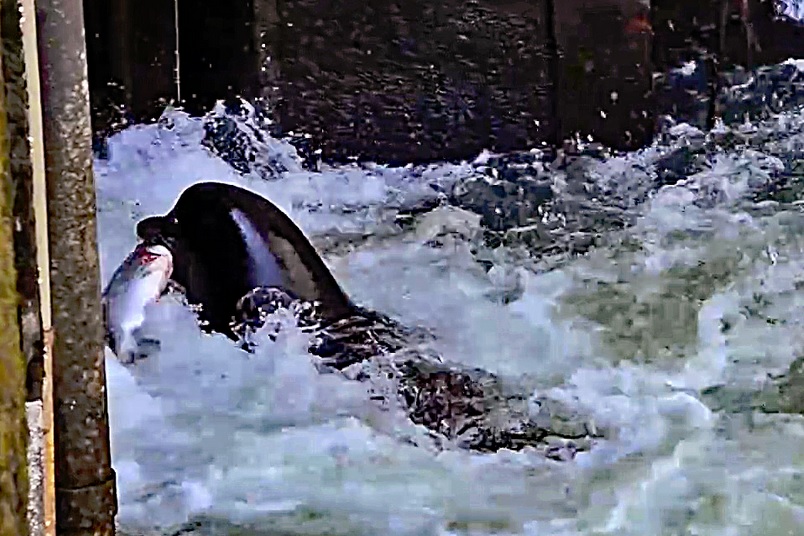 Oregon Department of Fish and Wildlife,

The National Marine Fisheries Service (NMFS) has approved the Oregon Department of Fish and Wildlife’s application to lethally remove the few California sea lions present at Willamette falls in an effort to help save winter steelhead and spring Chinook from extinction.

Sea lions are protected under the federal Marine Mammal Protection Act (MMPA). On Oct. 6, 2017, ODFW applied for authorization to remove California sea lions at Willamette Falls under a provision of the MMPA that allows for limited lethal take of sea lions that are having a negative impact on protected fish species.

ODFW filed for the application because their analyses showed that the high levels of predation by sea lions (25% of the steelhead run in 2017) meant there was an almost 90% probability that one of the upper Willamette steelhead runs would go extinct. The level of predation on spring Chinook, although lower (7-9% annually), was still enough to increase the extinction risk by 10-15%.

The NMFS reached their decision after considering public comment on ODFW’s application as well as the recommendations of a 14-member stakeholder taskforce.

“This is good news for the native runs of salmon and steelhead in the Willamette River,” said Dr. Shaun Clements, ODFW policy analyst on the sea lion issue. “Before this decision, the state’s hands were tied as far as limiting sea lion predation on the Willamette River. We did put several years’ effort into non-lethal deterrence, none of which worked. The unfortunate reality is that, if we want to prevent extinction of the steelhead and Chinook, we will have to lethally remove sea lions at this location.”

Clements noted that this authorization will do nothing to help curb the recent influx of the much larger steller sea lions into the basin, or their impact on white sturgeon, a species that can live up to 100 years. “Steller sea lions are preying heavily on sturgeon in the lower Willamette but current federal law prohibits us from doing anything about that,” said Clements.

California sea lions in the U.S. are not listed as “endangered” or “threatened” under the Endangered Species Act (ESA). The most recent population estimate for the U.S. stock was 296,750 animals in 2016. ODFW requested and was granted authority to remove up to one percent of the population’s “potential biological removal” level, a metric that translates to a maximum of 93 animals a year on the lower Willamette. According to ODFW’s Marine Mammal Program Lead Dr. Shea Steingass, there are 50-100 animals that are present at the Falls at some point in the year.

“Removal of these sub-adult and adult males will have no impact on viability of the sea lion population but will greatly improve the outlook for threatened upper Willamette winter steelhead runs,” she said.

With federal authorization now in place, ODFW can move forward with plans to trap and remove sea lions from the Willamette. “We currently have up to 12 animals at the Falls and a majority of those have been seen here every year for the past 10 years” said Steingass.

ODFW will have to meet two federally-mandated criteria to remove an individual sea lion: it must be observed in the area between Willamette Falls and the mouth of the Clackamas River for two days, or be seen eating salmonids. Those sea lions captured on the Willamette by agency biologists will be transported to a secure facility and humanely euthanized by a veterinary staff. Staff will also perform a necropsy and collect samples to determine the age, health, and diet of the animal in an effort to better understand ecology and behavior of these animals. ODFW will continue to monitor sea lion predation at Willamette Falls, and report its findings to NMFS, which will decide in five years whether to renew ODFW’s authority.

Clements said the action is about striking a balance between the recovery of imperiled salmon and steelhead and the ongoing conservation of sea lions.

“We are trying to prevent a few individual sea lions from habituating to these areas that are hundreds of miles from the ocean where they are especially effective at driving already depleted fish populations further down the path to extinction,” he said. Predation by pinnipeds also threatens to undermine the gains made by significant regional investments in recovery efforts, such as improvements in fish passage at dams, restoration of fish habitat, and implementation of fishing regulations that prohibit anglers from harvesting wild fish.

The MMPA, unlike the ESA, has fewer tools for managers to use to balance the conservation of predators and prey and prevent these situations in locations where fish are most vulnerable. Sections of the MMPA were revised in 1994 to allow limited management of sea lions for the purpose of protecting ESA-listed salmon and steelhead. Unfortunately, the revisions do not allow for proactive management and cannot address emergencies like that occurring at Willamette Falls. In this regard, ODFW has been working with Oregon’s congressional delegation, which is working on a legislative solution that would give wildlife managers broader authority to deal with conservation problems if they arise elsewhere in the Columbia Basin. “I’m optimistic that we’ll get what we need from Congress, but also nervous that time is running out to get this done before the end of the congressional calendar,” said Clements.