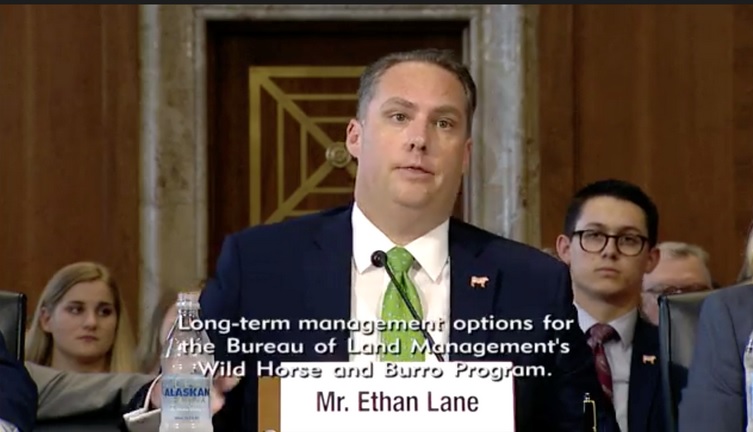 The current system of managing wild horses and burros on public lands “has been crippled to the point of catastrophic failure” and Congress needs to step in to improve the system “to the benefit of all wildlife, rangelands, and the multiple uses of those rangelands.”

That was the direct message on Capitol Hill today from Ethan Lane of the National Cattlemen’s Beef Association (NCBA) and the Public Lands Council (PLC). Lane testified on behalf of NCBA, PLC and the National Horse and Burro Rangeland Management Coalition at a hearing held by the Senate’s Committee on Energy and Natural Resources Subcommittee on Public Lands, Forests, and Mining.

In his testimony, Lane pointed out the dire situation now playing out on the West’s public lands: while the rangeland can appropriately support approximately 26,000 wild horses and burros, more than 88,000 currently roam across 10 Western states as of March 2019, according to the Bureau of Land Management (BLM.) Even more concerning is that on-range populations are doubling every four to five years, with a population of approximately 366,000 on-range horses and burros likely by 2028.

“Excessive populations deplete scarce food and water resources on the arid rangelands, leading to starvation and dehydration of the horses and burros,” Lane testified. “Maintaining the status quo places our public lands – and all animals and multiple-use activities that rely on those rangelands – at risk.”

In addition to laying out a variety of specific ways that wild horse and burro populations could be brought under control, Lane also endorsed and submitted for the record a compromise proposal that has been agreed to by stakeholders across the political spectrum – from ranchers to municipalities to national humane advocacy groups.

“The management recommendations set forth are the product of extensive negotiation, debate, and compromise amongst groups with wildly disparate views on this issue,” Lane pointed out. “Such compromise between political opponents is a rarity in the modern political arena, and I would urge the Committee to look closely at what we have managed to accomplish through good-faith collaboration.”