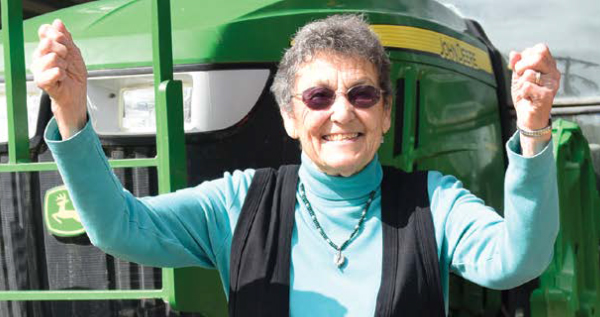 VanLeeuwen says she never dreamed she’d be in office, but her involvement in agriculture got her drafted as a write-in in the 1974 primary. Though she did not win the November general election in 1974, VanLeeuwen was elected to her first term in the House of Representatives in 1980, on her third try.

VanLeeuwen’s father raised registered Ayrshire dairy breeding livestock until losing his Lake County farm and dairy cattle when the banks went broke in the late 1920s. In the 1950s, VanLeeuwen and her husband, George (“Geo”), became seed farmers in the Willamette Valley. “Geo did not have time to attend the Ag Extension or Ag Agency meetings, so I went. I also volunteered with Linn County and Oregon Farm Bureau on legislative issues. I remember taking a one and one-half pound loaf of bread and taking out two slices to demonstrate the share of the purchase price the wheat farmer received.”

VanLeeuwen is a founding member of Oregon Women for Agriculture (OWA) and was the first secretary and newsletter editor. She also had a weekly “This is Liz VanLeeuwen with Mid-Valley Farm Report” radio program on KWIL in the 1970s until politics forced her to resign from both. In 1978, VanLeeuwen effectively organized and led a contingent of 53 OWA women and spouses to Washington, D.C., to lobby for Oregon agriculture.

VanLeeuwen was a leader in the effort to keep the state from condemning farmland along the Willamette River, including her farm, when the state was planning to create a giant 510-mile park along both sides of the river from Portland to Eugene. VanLeeuwen also led the effort to keep Oregon universities and community colleges on the quarter system rather than semesters because semesters starting in August would be detrimental to the workforce in harvesting, food processing, forestry, road construction and even tourism. She also recalls the Seed Lien Law she and her husband wrote together in the early 80s that requires paying farmers in a timely manner for seeds.

What is she up to today? At 93, VanLeeuwen is still an elected official with the Linn County Soil and Water Conservation District. She also serves on the board for Linn County Farm Bureau and at times helps out the Oregon Farm Bureau. She lives on her family farm, which her son James now manages, near Halsey.