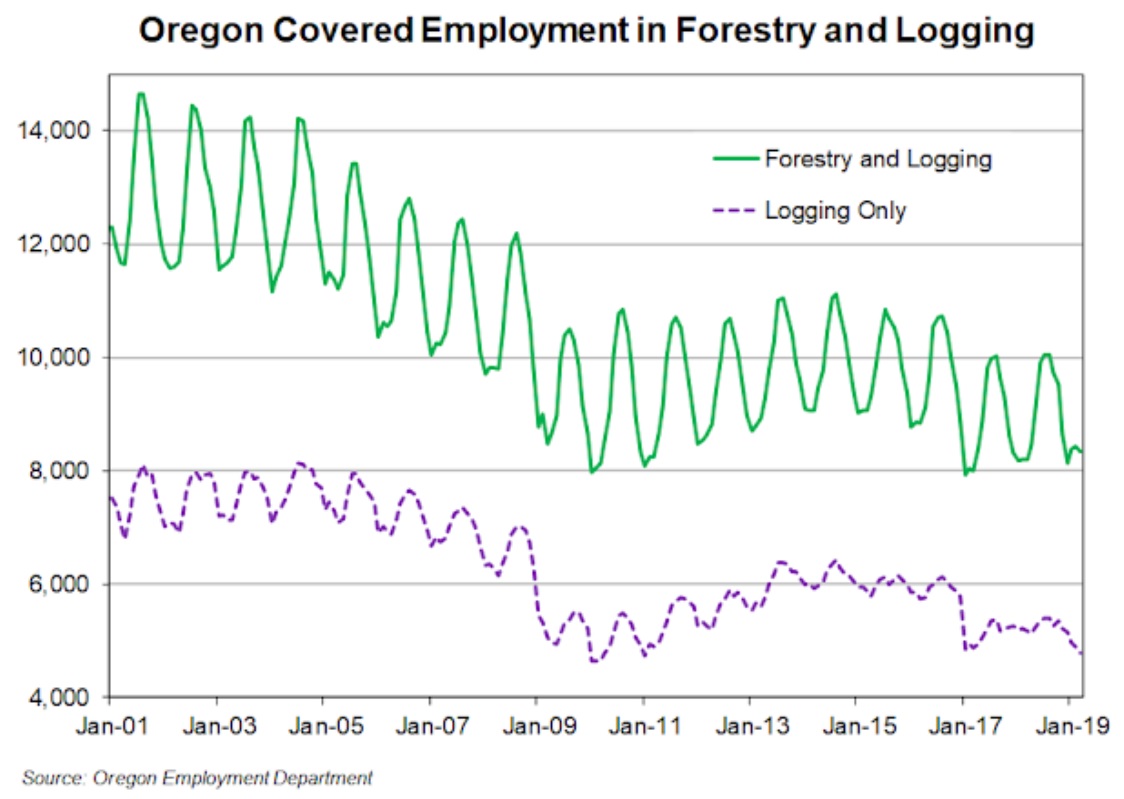 Oregon is one of the world’s great tree-growing areas. The state’s soils and climate provide ideal conditions to grow such commercially viable species as Douglas fir and ponderosa pine. Forests cover more than 30 million of Oregon’s 62 million acres – almost half of the state’s landmass.

Firms in the forestry and logging sector grow and harvest timber on a long production cycle, generally of 10 years or more. Timber production requires natural forests or suitably large areas of land that are available long term. Oregon’s often mountainous and remote terrain, in both public and private ownership, provides that land base.

The forestry and logging subsector is made up of three industries:

According to the Oregon Employment Department’s covered employment statistics, the subsector’s 755 firms employed 9,009 people statewide and added $546 million in payroll to Oregon’s economy in 2018. Employment was in slow decline between 2005 and 2009 and has since leveled off. It is currently varying seasonally in a band between 8,000 and 10,000 jobs.

Covered employment is a count of workers covered by Oregon’s unemployment insurance (UI) program. Self-employed individuals are generally not included in the program and, therefore, not counted. However, the U.S. Census Bureau produces nonemployer statistics. A nonemployer business is one that has no paid employees, has annual business receipts of $1,000 or more, and is subject to federal income taxes. In addition to covered employment, the forestry and logging industry had 1,544 nonemployers in Oregon in 2017. Gross income for these companies was $103 million. Although there is no further industry breakout, it is likely that many of these self-employed are involved in timber tract operations and the gathering of forest products.

Forestry and logging is a highly seasonal industry. Employment generally grows throughout the spring and peaks in August. Employment often stabilizes for a month or two in the fall before dropping off as winter rains begin.