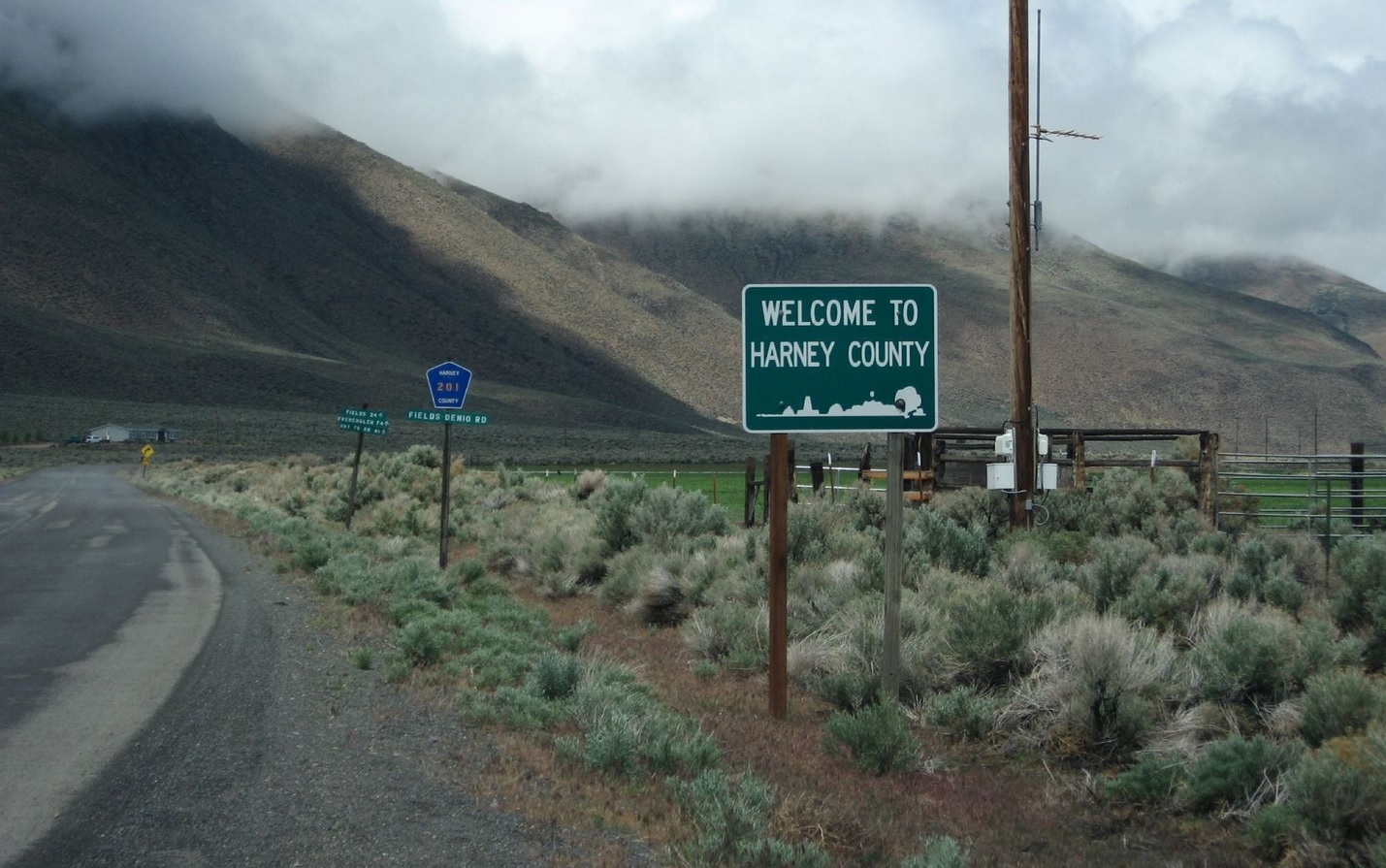 Imagine – you’re a range rider checking cattle on a 7,000-acre forest service allotment, it’s a hot July day. Now imagine riding through trees, creeks and into canyons on this allotment, all seems calm until you ride upon the body of a deceased bull. At first, you are bummed – dang! Must’ve been a brawl and he sustained life threatening injuries. You call-in the bull and ride on. Okay, now imagine you ride on for half a mile or so and you find another dead bull – perhaps, the hair starts to stand up on the back of your neck. Perhaps, a feeling comes over you and you know something isn’t right.

This was the reality for a livestock team on July 30, when they called in two bull carcasses to the Silvies Valley Ranch Headquarters in Seneca, Oregon. Colby Marshall, vice president and general manager of the 140,000-acre ranch contacted the Harney County Sheriff’s Department to investigate.

Now here’s when things start to get really – odd. The Sheriff’s Department performs a forensic exam and scans the scene with a metal detector. The carcasses have several organs removed with precision cuts. The removed organs include the anus, testicles and tongue. From one body, the penis was removed, and one ear cut off. The investigators can’t find any noticeable tracks leading to the bodies – other than from the range riders. Also, they can’t determine a cause of death. No bullet wounds, no strangulation marks, no sign of a struggle from whoever took down these 1900+ pound bulls. Toxicology reports inconclusive because the 24-hour window from death to investigation had already lapsed. 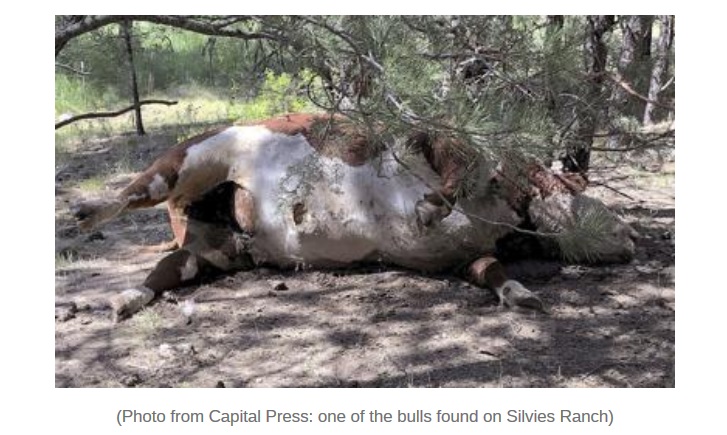 (Photo from Capital Press: one of the bulls found on Silvies Ranch)

Just wait – the horror doesn’t end there. The next day, ranch employees find three more dead bulls on the allotment. Same circumstances, same organs removed. Now Silvies Ranch has five unexplained, mutilated dead bulls. “It’s disgusting and heart wrenching that someone could do this to our gentle bulls,” said Marshall.

Surely this was a rare, isolated crime. Immediately, the Oregon Cattlemen’s Association (OCA) issued a press release and offered a reward for information leading to the arrest and conviction of the offender or offenders of this crime. OCA issued a press release across social media – what we didn’t expect, was the outpouring of followers with similar stories.

“I have to admit, before this happened to us, I was naïve about the circumstances. I did some research and learned there have been over 8000 reported cases of mutilated cattle since the 1970s,” said Marshall. The FBI has documented thousands of cases across the United States of cattle dying in the same way and not only bulls – cows with utters and reproductive organs removed as well. Some reports indicate the instrument used to remove organs was heated to enable meticulous cuts. No signs of struggle, no cause of death. 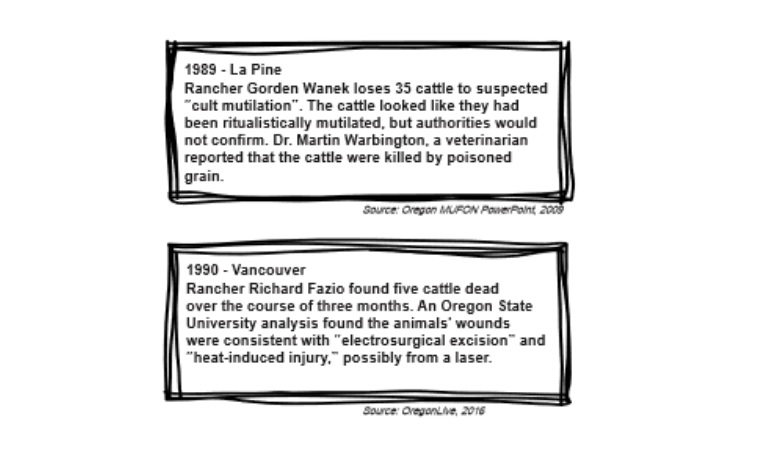 Reports also indicate traces of blood cannot be found near the removed organs and scavenger animals won’t approach or pick at the bodies. Marshall confirmed this was also the case for the five bulls at Silvies. As you are reading this, you must be asking yourself – how is this possible?

How can a person or a group of people track down five bulls across thousands of acres of forest range and murder them without a single track, or sign of death and then remove organs without a drop of blood?

“I hate to joke about this, but if they’re this good at finding bulls, I’d like to hire them. It’s extremely difficult to find range bulls, especially in the fall after breeding season. I would like to know how they did it,” said Marshall.

I asked Colby the question I’m sure many of you are considering right about now – was it aliens?

“There’s no doubt something very strange happened to our bulls and has been happening to cattle for decades. My hair stands up on the back of my neck, I feel uneasy being out there where it happened. We know there are some crazy people out there doing some sick things,” said Marshall, “that’s how we are looking at this situation.”

Colby said there were several important things he learned from this experience that he wants to pass on to other ranchers who may find themselves in this situation:

– Be very cautious when you locate an unexplained, dead animal. It’s important to look at the incident as a crime scene and you want to disturb the scene as little as possible. When you are examining the carcass, move around the body in a large circle. If you approach the body then approach and walk away in the same track. Contact authorities immediately to investigate the scene.

– The people performing these crimes are dangerous. Take precautions before returning to the range, such as sending teams of riders – do not go out alone. Make sure everyone has reliable communication and they are checking in regularly with the ranch.

Silvies Valley Ranch is offering a $25,000 reward for information leading to the arrest and conviction of the people who committed these crimes. Colby and all employees at the ranch are on high alert. Please do not seek out the people who committed these crimes or put yourself in harms way as a result of the rewards being offered – this is a very dangerous situation. “Since this occurrence, we’ve had so many calls from people who say the same thing happened to them and we want to make sure others can be prepared if this happens to their livestock,” said Marshall.

There are many conspiracy theories out there: Satanic Cults, Fertility Sacrifices, Governmental Probing, Extraterrestrial Encounters – all of course, are only speculation. While the facts stand that cattle are falling victim to selfish intentions and have been victims of an unexplained and brutal phenomenon for decades now. As a rancher and cattle owner, please do not take these circumstances as a hoax. Take time to research the documented cases and put a plan in place for this type of situation on your own ranch. No matter what you choose to believe – precaution never hurts.