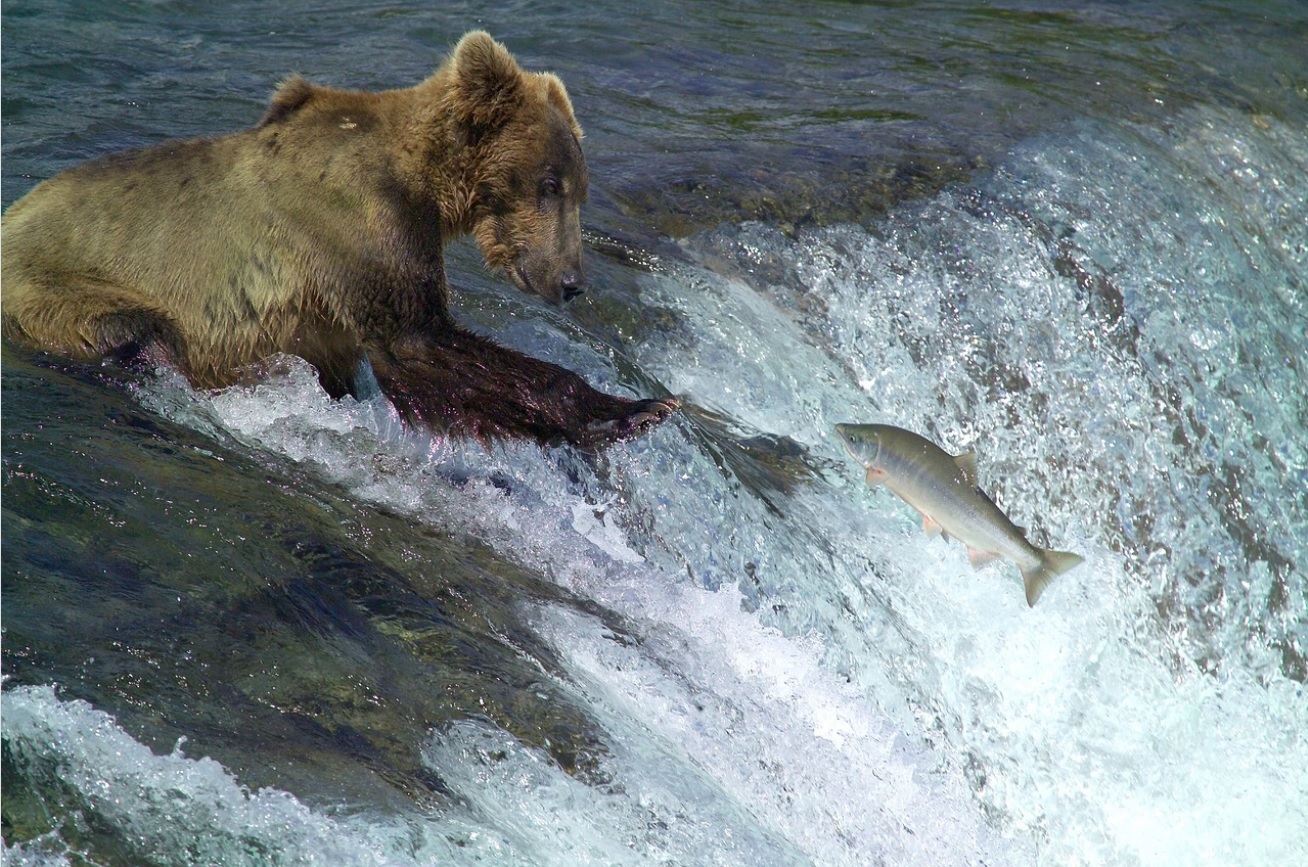 It’s a familiar scene to anyone who’s watched footage of brown bears catching sockeye salmon in Alaska: They’re standing knee-deep in a rushing river, usually near a waterfall, and grabbing passing fish with their paws or jaws.

But a new study published in the journal Conservation Letters reveals a different picture of how and when bears eat salmon. Most of these bears, also known as grizzlies, are dipping into small streams to capture their iconic prey.

Using a foraging model based on the Wood River basin in southwest Alaska, a study team led by Oregon State University determined that while small-stream habitats have only about 20% of the available salmon in the watershed, they provide 50% of bear consumption of salmon.

“This tells us that populations of sockeye salmon that spawn in little streams are disproportionately important to bears,” said study lead author Jonny Armstrong, an ecologist at Oregon State University. “Bears profit from these small streams because they offer salmon at unique times of the season. To capitalize on plentiful salmon runs, bears need them to be spread across time.”

Small streams typically have cold water, which leads to populations of salmon that spawn much earlier in the season when no other populations are available to predators such as bears.

These results have potential consequences for how environmental impact assessments are conducted and evaluated for large projects such as the proposed Pebble Mine in Alaska’s Bristol Bay.

These reports typically focus on how the project will affect the abundance of salmon in lakes and rivers, but they usually overlook smaller habitats, Armstrong said.

“When people want to build a large mine, they think these streams don’t matter because they represent a small fraction a watershed, in terms of area or salmon abundance. In conservation and management, we generally place value on the largest runs of salmon at the expense of the smallest ones,” Armstrong said. “If we pose a different question and ask which habitats are important for the ecosystem, then small streams become particularly relevant.”

The researchers developed a mathematical model that explores how watershed development and commercial fisheries affect how many sockeye salmon are available to grizzlies. The model simulated different patterns of development and explored how they affected the number of salmon bears consumed.

Protecting large salmon runs at the expense of smaller ones turned out to be bad for bears.

“This causes the bears’ total salmon consumption to drop off faster compared to strategies that protected small salmon runs and the early feeding opportunities they offer to bears,” Armstrong said. “If you impair these areas, you may only reduce the total number of salmon by a little, but the number of salmon that end up in bear’s stomachs – you could reduce that a lot.”

According to the study authors, there are two significant reasons why the largest bears in the world are drawn to small streams to eat salmon.

First, the fish in these streams are easy to catch for adult and juvenile grizzlies. And second, because the water is colder than in lakes and rivers, salmon spawn in them earlier – probably to give their eggs more time to incubate, the authors said. So, the fish are plentiful by the first week of July – making them the first places bears fish after they emerge from hibernation.

“When they come out of hibernation, the bears are just scraping by and barely making it,” Armstrong said. “Having these streams means they can start eating salmon in early July, which is about six weeks before the river- and lake-salmon populations start spawning and become available to bears. It’s an incredible foraging opportunity for bears.”

Armstrong added, “I’m sure that native Alaskans who subsisted on salmon were keenly aware of this, too.”

Armstrong is an assistant professor in the Department of Fisheries and Wildlife in OSU’s College of Agricultural Sciences.

Collaborators on the study included Daniel Schindler, professor in the School of Aquatic and Fishery Sciences at the University of Washington; Curry Cunningham, research fisheries biologist at the University of Alaska Fairbanks; Will Deacy, a former postdoctoral researcher at OSU now at the U.S. National Park Service; and Patrick Walsh, supervisory fish and wildlife biologist at the U.S. Fish and Wildlife Service’s Togiak National Wildlife Refuge.

Funding for the study was provided by the David H. Smith Conservation Research Fellowship of the U.S. Fish and Wildlife Service, the National Science Foundation, the Gordon and Betty Moore Foundation, and funds from the Alaska salmon processing industry that support the University of Washington’s Alaska Salmon Program.

About the OSU College of Agricultural Sciences: Through its world-class research on agriculture and food systems, natural resource management, rural economic development and human health, the College provides solutions to Oregon’s most pressing challenges and contributes to a sustainable environment and a prosperous future for Oregonians.