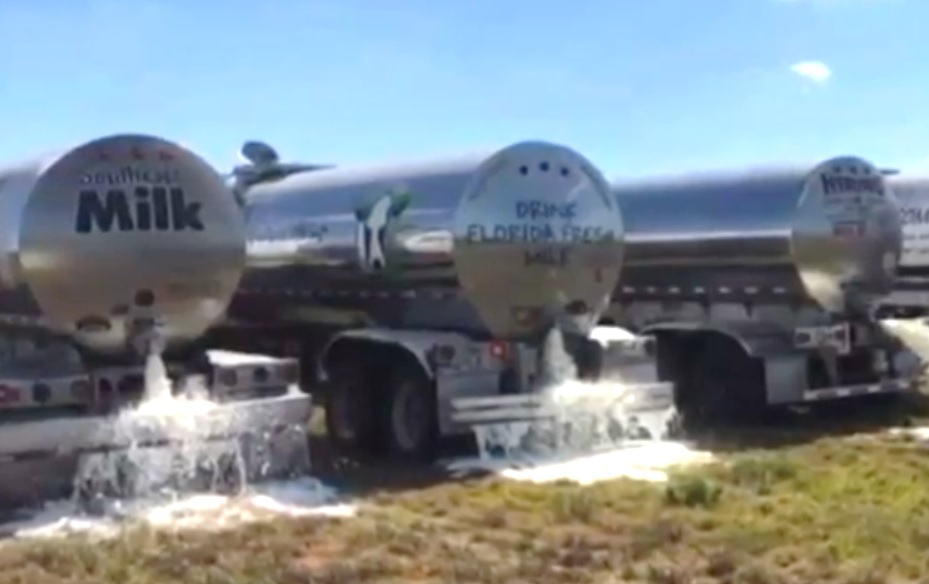 The coronavirus panic has hit America hard, as restaurants and bars close, and people practice social distancing to stem the spread of the virus. As shoppers make runs on basic household goods like toilet paper, hand sanitizer, bleach, and groceries like eggs and milk, grocery stores all across America have taken to limiting purchases. Signs are now common that instruct shoppers that they can only purchase a certain number of packages of noodles, or jugs of milk, per day. So why are dairy farmers being told to dump huge amounts of milk instead of shipping it to distribution centers?

Farmers have posted photos and videos like these all across America’s heartland: 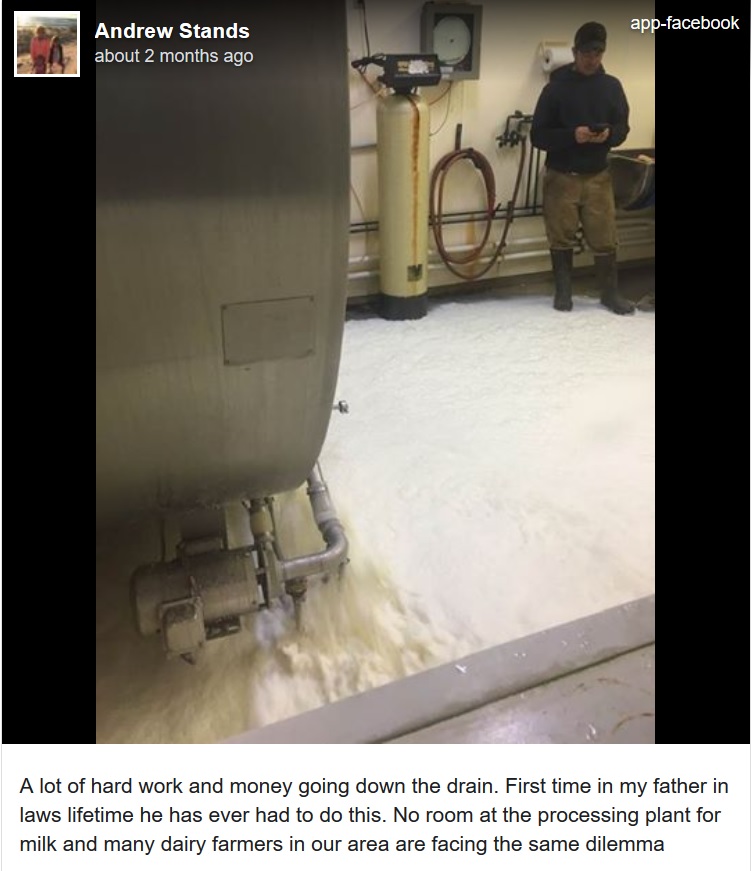 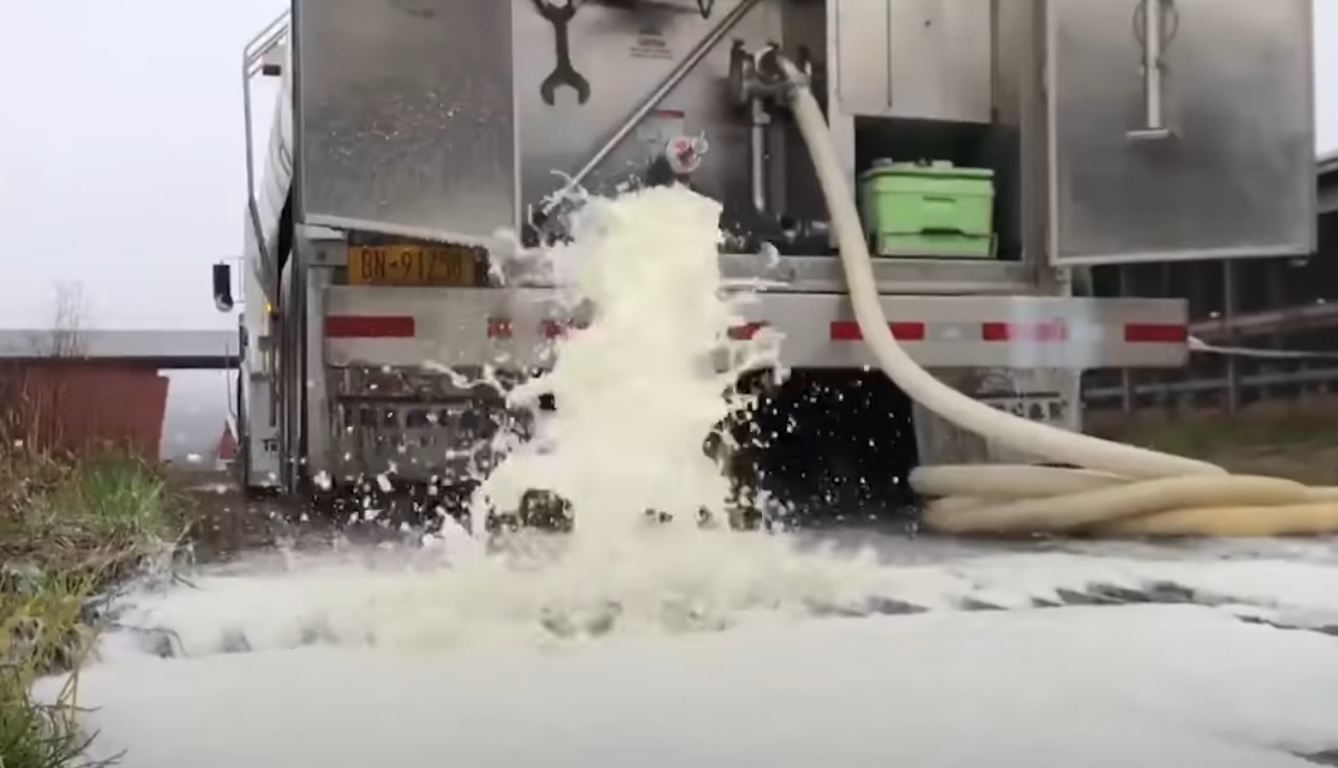 From Georgia to Pennsylvania, videos like this are flooding social media.  Dairy producers are facing a devastating scenario and being forced to dump milk down the drain. For some dairy farmers, this marks a first.

“This is the first time in the 32 years I’ve been in business that we’ve had to dump milk in the fields,” says Arnie VanDieden, a dairy producer in Texas.

The Texas producer isn’t alone. Paul Hartman in Reading, Penn. has also been in the business more than 30 years and faced a similar scenario earlier this week.

“Our dairy processor told us on Monday,” says Hartman. “They gave a letter that the driver dropped off that said they were supposed to dump our milk for the next two days; they weren’t going to pick it up. Right away when we heard it, we were shocked. All we hear is the milk is in demand, the stores are having trouble getting it, and then all of a sudden, they’re asking us to dump our milk. So that was kind of confusing.”

It seems counterintuitive that America’s dairy producers force farmers to dispose of their milk at the very time when it’s become harder and harder to find at grocery stores across the country. Despite record-high demand in the consumer market, it has not filled the crater left in the wholesale market. As restaurants close all over America, wholesale markets for dairy products have largely shut down.

Transitioning the supply chain from wholesale to retail markets has proven challenging. On top of that, retail markets have not kept up, resulting in gluts of milk on the market. In a time when grocery stores have shortages of a lot of different items, dairy farmers have no choice but to dump their supplies.

This farmer explains what’s going on (stand by for an adorable shot of a cow comforting him with a big lick on the arm):

It’s not just milk. A glut of many types of produce has resulted from the closure of restaurants, college dorms, and other large wholesale outlets. Politico reported over the weekend:

The coronavirus pandemic is leading the food industry and regulators to change policies as they grapple with empty shelves, a glut of fresh produce and milk, and sudden shifts in consumer buying habits.

The problem isn’t a shortage of food and commodities. If anything, food waste is becoming a bigger issue as traditionally big, bulk buyers — like college dorms and restaurant chains — suddenly stop receiving deliveries. As a result, millions of gallons of milk are being dumped, and farmers have no alternative but to turn fresh vegetables into mulch.

Federal agencies are scrambling to keep up with the altering landscape by easing rules governing trucking, imports, agricultural visas and labeling requirements for restaurants and manufacturers.

“The way a client described it is they’re seeing a tsunami of demand shift from foodservice to food retail,” said Bahige El-Rayes, a partner in the consumer and retail practice at Kearney, a consulting firm. “If you’re a manufacturer today of food, it’s basically how do you adapt? How do you actually take what you sent to restaurants then sell it now to retail?”

Things have gotten so bad that industry groups have called on major retailers to help them adjust their ordering patterns. According to industry newspaper Farm and Dairy:

At first, people stocked up on dairy products, especially fluid milk, like never before. That left empty shelves in the dairy section. Grocery stores responded by setting quantity limits on milk purchases so they didn’t run out again.

Zippy Duvall, American Farm Bureau Federation president, said on a media call April 3 that he personally reached out to Walmart asking them about their milk purchasing limits.

It’s gotten to the point that the American Dairy Association Mideast is asking people to report stores in Ohio and West Virginia that are putting quantity limits on milk purchases. If you see a store limiting milk purchases, take a picture, note the location, date and time and send it to [email protected]

The Foundation for Economic Education (FEE) pointed out one other factor affecting the ability to sell milk:

Another issue is that it is illegal to sell unpasteurized milk in many states, Wisconsin included, so if dairy processors aren’t buying it from farmers, it goes to waste.

And farmers have narrow time windows to solve all these problems, because milk is so perishable.

It all adds up to a glut of milk at the dairy even while there are shortages at the stores.

FEE goes on to explain how laws against price gouging have hampered the ability of supply chains to make rapid changes to respond to consumer demands:

Grocery stores could take up more of the slack if they were free to price and sell milk according to consumer demand. But, laws against “price gouging” keep the retail prices of dairy products artificially low during a demand surge. Too-low prices encourage hoarding, which leads to shortages. It also limits the profits for selling dairy.

If a store were free to charge market prices, however high, it would discourage hoarding, prevent shortages, and earn higher profits. The higher profits would increase the grocers’ own willingness to pay for dairy products. This increased demand would ultimately translate into higher prices for farm milk, making it more affordable for farmers to bring their milk to market.

This all comes at a time when milk prices have been at a historic low and farmers nationwide struggle to survive. From 2000 to 2017, “the U.S. lost 75% of dairy farms with fewer than 50 cows and 60% of those between 50 and 99 cows,” according to the Milwaukee Journal-Sentinel.

Ultimately, what we see is a pattern repeated throughout the decades. Governmental intervention into markets makes them less free, less able to adapt to changing conditions, and less able to produce profits for everyone involved in the supply chain.

Jeff Reynolds is the author of the book, “Behind the Curtain: Inside the Network of Progressive Billionaires and Their Campaign to Undermine Democracy,” available now at www.WhoOwnsTheDems.com. Jeff hosts a podcast at anchor.fm/BehindTheCurtain. You can follow him on Twitter @ChargerJeff.