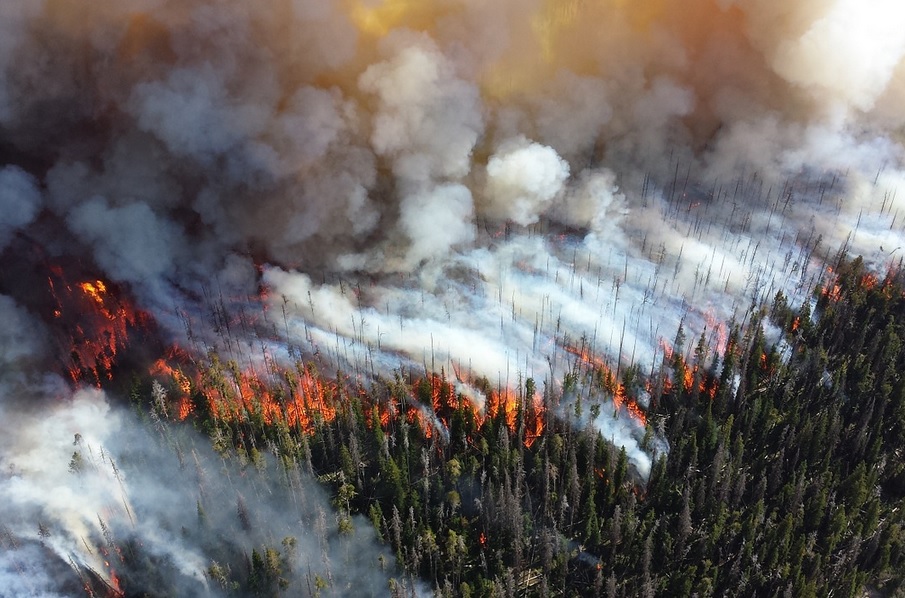 When the fires were raging and the state was blanketed in smoke, our office wrote about some of the implications and impacts associated with wildfires. We fleshed out the discussion in our forecast document (see PDF pg 11) and during our forecast release the other week. See that for the bigger picture perspective. Today I wanted to dig into some of the underlying details a bit further. Keep in mind we still do not know the full extent of the damage, or how things will play out over the next couple of years. But here is what we know now, and what we built into the forecast.

First, what makes this year’s fires different is the fact that they were/are much closer to cities and towns than in recent years. We’re not only losing timber and recreation areas, we’re losing structures and towns and evacuating tens of thousands of Oregonians. As of early September, if you look at the areas within the fire perimeters and those in the Evacuation 3 zones (full evacuation) they encompassed around 2 percent of the state’s population, and around 1 percent of total real market property value and employment. That’s a huge portion of the state to be fully evacuated. 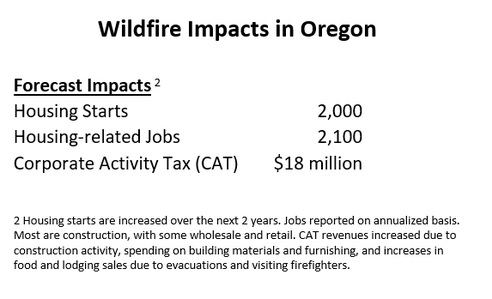 More than one million acres have burned so far. We know fires burn in mosaics so there will be patchwork devastation across the state. Some stands of trees will be in good shape, while others will be gone. Some homes will remain standing, while others will be burnt to the ground. In terms of acreage and ownership, the following table comes from Mason, Bruce, and Girard, a natural resource consulting firm, from which Mark Rasmussen serves on the Governor’s Council of Economic Advisors. Our friends at the Department of Forestry have similar type numbers looking at ownership by fire, not by county. 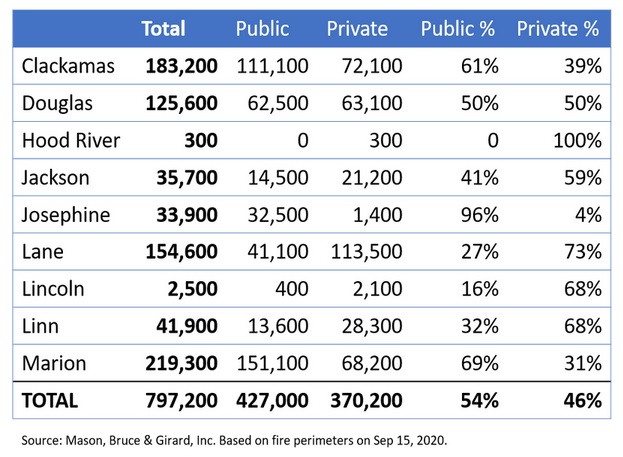 Broadly speaking there are four main channels in which the fires will impact Oregon. There is the direct impact on sectors reliant upon the forests. There is the destruction of properties that will need to be rebuilt. There is the impact of the evacuations themselves. And then there is the longer-term implications, largely related to migration.

Let’s first look at the sectors that are impacted directly. This leaves to the side for today those sectors impacted by the smoke, where Oregonians couldn’t go outside for a week. But in terms of sectors reliant upon the forest for work, it’s 2-3% of the state’s economy. The timber industry — logging and the mills — account for the bulk of these figures. The potential impacts here are that harvest levels may be impacted or reduced for years to come, depending upon the level of devastation and ownership of the land, etc.

The other 0.5-1% of the impact comes from forest-based outdoor recreation. Overall BEA estimates indicate outdoor recreation is nearly 3 percent of Oregon GDP but half of that is the travel and tourism component (gasoline, lodging, food) and then the actual recreation portion includes things like water parks, festivals, tennis and the like. The hard thing to parse here are activities like cycling and boating. Clearly some of that is forest-based. I enjoy paddleboarding on lakes in the summer and the lakes are located in the forests. But what about fishing on the Columbia? Is that forest-based? And what is the breakdown between cycling around town, or commuting to work vs mountain biking in the forests? Clearly the available data overstates the forest component of outdoor recreation which is anything kinda related to being outside. So some very rough cuts of the data would indicate it is around half a percent of state GDP. 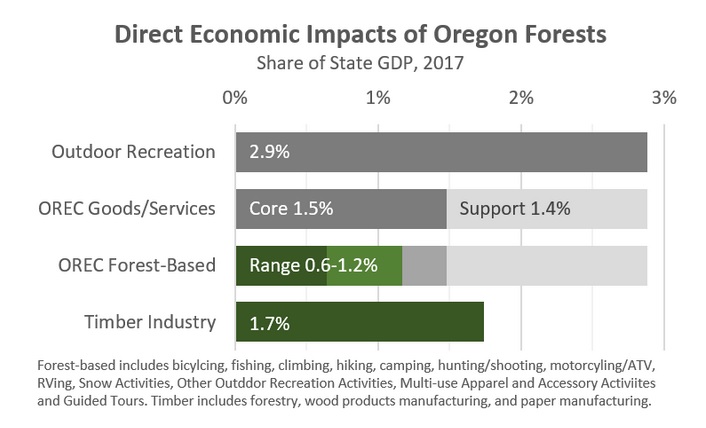 In terms of the destruction of property, what we currently know is the following, This is a very rough cut and estimate, but indicative of what we were looking at as we were adjusting our forecast at the eleventh hour.

Just over 4,000 residences have been burned. If you take median home value by census tract for the different fires and apply that to the number of homes, you get around $1.1b billion in total property values. Mike Cowles, the Lane County Assessor, was gracious enough to help me look at the properties impacted by the fires in his county. What it showed was among the residential properties within the evacuation areas, his data indicated the assessments were 50/50 in terms of the value of the land versus the value of the improvements (structures). So taking that 50/50 split and applying to the 4,000 homes indicates around $575 million in lost homes. Additional research from the Insurance Information Institute (III) shows that homeowners insurance typically includes coverage for personal belongings equal to 50-70% of the value insured of the structure. So, roughly, that’s another $340 million in lost personal belongings, bringing the total to nearly $1 billion. In looking at III research on wildfires, it indicates that during big wildfire years insurance seems to cover about 75% of the losses. I could not find a breakdown of residential vs nonresidential here but that does factor into those numbers. Regardless, the losses and devastation is big, and the final numbers will be even larger than this back of the envelope work from a few weeks ago. Plus none of this yet includes the commercial or industrial losses, or the value of the standing timber itself.

The next table shows what our office built directly into our forecast. 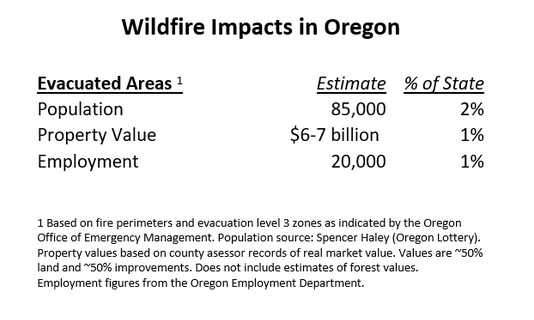 Our office included an additional 2,000 housing starts over the next 2 years. Now, we know we’ve lost more than 4,000 homes but we are only including 2,000. Why? One reason is these were ad hoc adjustments made at the last minute to the forecast and the estimates of the number of homes lost kept climbing by the day. That’s a factor. But also, two key questions relate to whether we will see every lost home rebuilt, and whether there is enough capacity within the construction industry to build an additional 4,000 homes in the months and years ahead. Will Oregon end up building all of the units? Probably. But we may need to reallocate construction capacity away from projects in Portland, Salem, Eugene, Medford and the like, and use those workers and materials in the rebuilding towns. To the extent that happens, then total construction industry production won’t increase as much given we will see some temporary reductions in the main cities until the rebuilding is complete.

The other direct impact our office built into the forecast was related to the Corporate Activity Tax. In the short-term we will see a boost to food and lodging sales associated with the evacuations, and the visiting firefighters helping to battle the fires. Additionally the rebuilding phase will result in an increase in the sales of construction materials, firm revenues and the like. All told our office increased the CAT forecast by $18 million total in 2019-21 and 2021-23 combined. However much of these impacts are in the short-term and will fade out in the year(s) ahead.

Finally, a key concern for the outlook remains any long-term implications from the fires. Our office previously wrote about the migration concerns and how that could impact the long-run outlook for the state.

The scariest potential impacts for Oregon is that fewer households and investments may be attracted to the region moving forward. Oregon’s primary comparative advantage remains its ability to draw skilled workers away from other states. To the extent that local quality of life has been reduced, or if Oregon is perceived as a riskier or costlier place to live and do business, this advantage will be less pronounced. Increased risk lowers growth prospects due to uncertainty and higher costs. If these fears are realized, our office’s long-run outlook would need to be lowered.

Over the summer, ECONorthwest released an economic analysis of Cascadia, which is a different type of natural disaster, but their report included a really good summary of the economic literature. Included there was an interesting paper by Boustan et al (2017) that examined county level impacts of natural disasters. One of the findings in the paper was that fires were associated with larger impacts on migration than most other types of natural disasters. That’s certainly the main long-run concern our office has. To what extent do residents impacted by the fire pack up and leave Oregon? To what extent do the fires deter other people from moving to Oregon in the first place due to the potential threat of fires? The answer here is unknown. Our office has not built in any sort of long-term impact to date, especially considering other climate-related issues likely indicate Oregon is relatively more attractive. Even so. here is how we wrote up one potential silver lining in the document:

Now, one potential offsetting factor for Oregon today is that most, not all, but most of the impacted and fire-ravaged communities are located within the Eugene, Medford, and Salem metro areas. Yes, these communities are largely smaller, and more rural in nature, but they are not far-flung nor geographically isolated. Given that the primary cities, and job centers have not been lost for the metros, it is likely that many residents of the devastated communities still have somewhat brighter job prospects and thus may be more likely to remain and rebuild. It remains too soon to tell the extent of the damage today. Longer-term effects are still to be determined, particularly should such fires become increasingly frequent across the West.

Our office will continue to monitor the available information and how it impacts the state’s economic and revenue outlook. The Governor has put together a Wildfire Economic Recovery Council which our office will help with as needed as well.