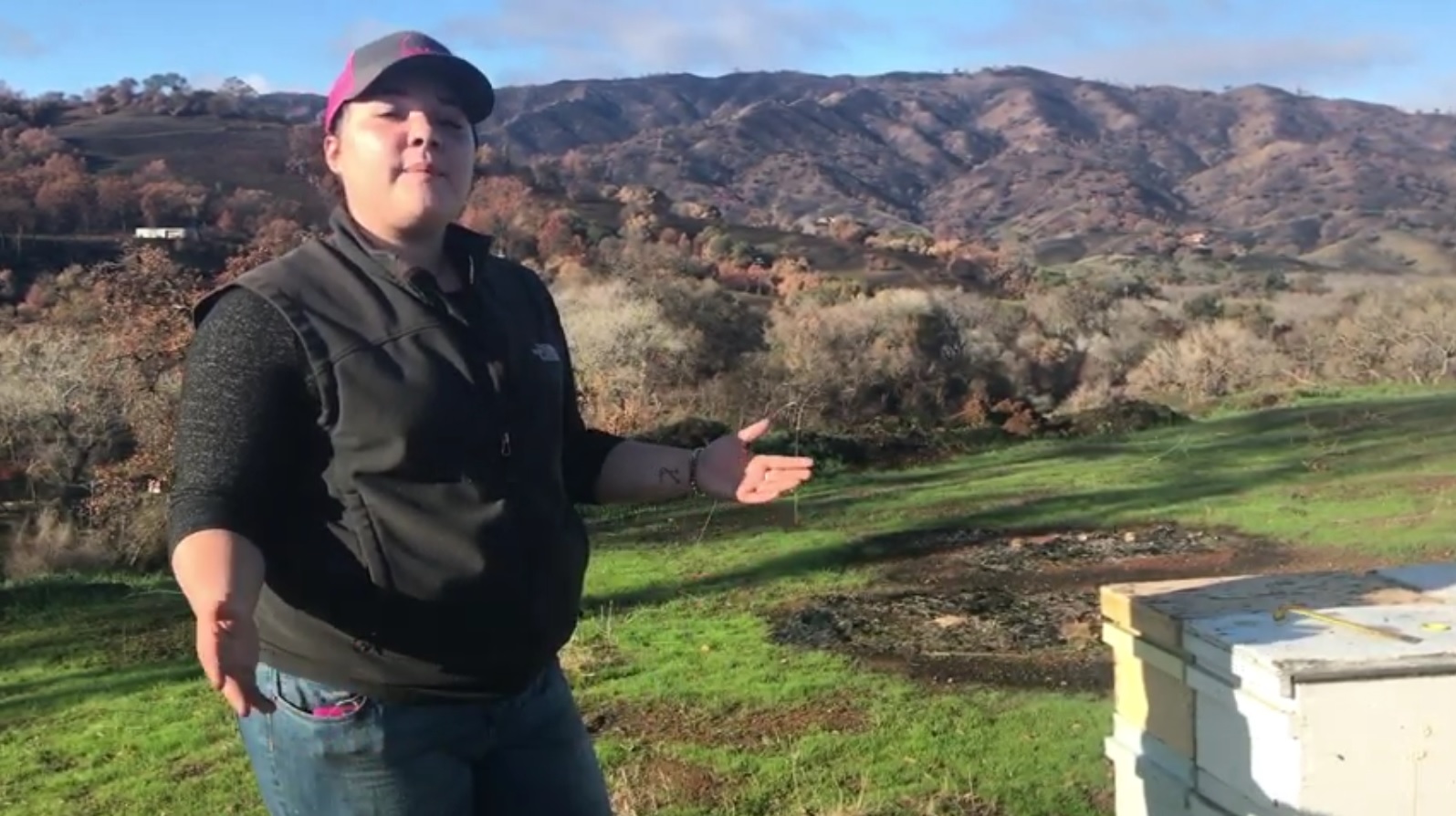 Beekeepers who suffered losses from a lightning-sparked wildfire last summer say they have a few surviving honeybee colonies, and look forward to spring when they can build more hives for almond pollination a year from now.

“I lost my 2021 pollination season due to the fire; I just lost my income,” said beekeeper and queen breeder Caroline Yelle of Vacaville. “The hives that I have left to go into the almonds are what survived the fire. I’m more focusing on the spring, when we’ll be able to split the hives and make more for the 2022 season.”

Yelle, owner of Pope Canyon Queens, lost most of her honeybees, buildings and equipment when the Hennessey Fire swept through her area Aug. 19. At the time, she said, “In one day, the fire burned almost everything that we have.”

The Hennessey Fire, which raced through Yelle’s part of Solano County, eventually merged into the LNU Lightning Complex, which burned 363,200 acres in five counties.

She explained that her mentor, beekeeper Rick Schubert—who helped Yelle settle in California and build her company after she moved from Canada a few years ago—also suffered severe fire losses.

Yelle estimated destruction of her 500 hives as a loss of at least $100,000 for the bees alone, plus another $100,000 loss of the benefits from those hives. She said she intends to place her 200 remaining healthy hives into almonds for the upcoming bloom.

“The beekeepers and I are getting together and trying to find enough hives,” Yelle said. “Beekeepers that are short any bees subcontract to us, plus I have some small contracts.”

When the fire roared through last summer, Yelle said bees were in hibernation, so she was unable to create more hives from the surviving colonies. This spring, she will try to increase her bee numbers, but she said it will take more than one season to build to the numbers she had before the fire.

“When bees are placed into the almonds during bloom, things start to kick in and the hives grow and bees make honey from that first bloom,” Yelle said.

Since the fire, Yelle said she has spent time on cleanup, paperwork, permits and rebuilding plans. She said it took “a good two months” to clean debris from the property, adding, “it’s a hard process emotionally.”

Yelle said she has hired a general contractor and plans to construct a more fireproof metal shop and farm by mid-February.

“Today, we have the empty land, but it’s still better than to see your personal belongings all burned out,” she said, “but we’ve made some progress.”

Beekeeper Phil Hofland of Dixon estimated his losses from the fire at between $30,000 and $40,000 from lost equipment such as nucs, or nucleus colonies, for raising queens and about a dozen hives that burned. Having experienced previous fires, he said he spent much time on creating defensible space.

After the fire, Hofland said he hauled a majority of the surviving colonies to Nevada, adding, “They came back in super shape and are the best-looking bees that I’ve seen.” He said he will likely have about 1,300 colonies for almonds this year.

“In general, nobody is bragging about how good the bees look,” Hofland said, “which is sad because you put all the work and effort into them. That is why I’m kind of amazed about how good my bees look.”

During the next few weeks, beekeepers will finish moving some 2.5 million honeybee colonies into California orchards to pollinate the state’s 1.26 million bearing acres of almond trees.

Supplying enough bees for pollination is an annual concern, as beekeepers report colony losses due to challenges such as reduced forage, the Varroa mite and pesticide-related issues. For almond farmers, the cost of pollination services—typically averaging $200 per hive—represents 15-20% of total input costs.

Bee breeder-geneticist Susan Cobey of Washington State University said for beekeepers affected by fire, “recovery is stressful and expensive for both the beekeepers and bees, in terms of labor and resources essential to build up colony health and numbers.”

“Over the long term, the lack of available and diverse bee forage resources will continue to stress colonies,” Cobey said. “Nutritionally stressed bees are more vulnerable to pests, pathogens and chemical residues.”

She said beekeepers provide their colonies with supplemental feed, which she described as an expensive, short-term solution that doesn’t replace “the quality of essential nutrition that natural bee forage provides.”

In some cases, Yelle said, a fire can stimulate growth of flowers for bee forage that haven’t been seen in some time.

“Usually, the first year after a fire is good for flowers and the second year is even better,” she said. “We may see some flowers that we don’t expect come back. Maybe we’ll be surprised and see new species of flowers blooming. Plus, a lot of people have planted wildflowers, so that’s going to make a difference.”

Butte County beekeeper Buzz Landon, president of the California State Beekeepers Association, said, “With 2.5 million hives needed for almond pollination and considering loss of habitat for bees from fires and drought conditions, the supply may be tighter this year.”

“Many people are just now looking through their bees, so they don’t know exactly what they have,” Landon said. “But when you have a loss (due to fire), it runs up the cost that much more. You’re either purchasing bees or you’re trying to rebuild, and the time to do that is in the springtime. It has been so dry for so long that the forage that is trying to come up now is not really there yet—if it comes up at all.”

He reminded commercial beekeepers who place colonies into crops for pollination to comply with the BeeWhere program, which tracks and safeguards hives using mapping tools. The program requires beekeepers to register beehive locations and notify county agricultural commissioners when hives are moved.