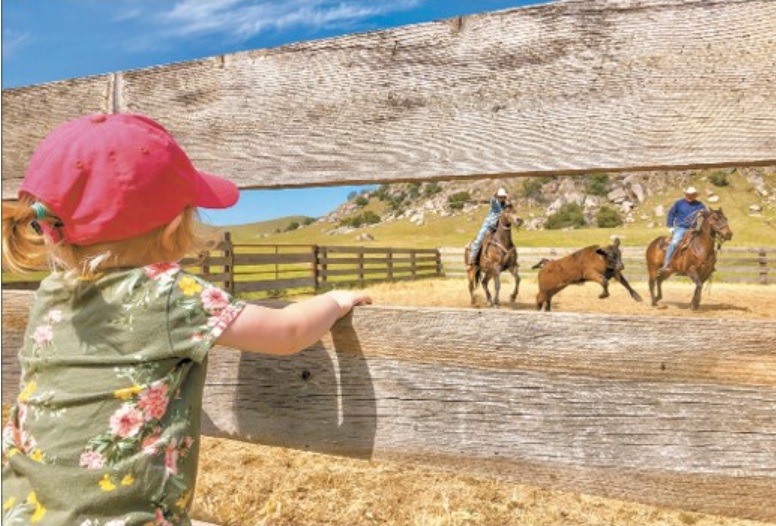 The wife of a fifth-generation cattle rancher from Tulare County earned the Grand Prize in the 39th annual California Farm Bureau Photo Contest.

Hannah Gill of Exeter won $1,000 for a photo of her 2-year-old daughter peering through a fence to watch her father rope cattle.

“She was so excited to watch Dad on a horse,” Gill said. “She loves it. She loves the cows, loves the horses.”

The California Farm Bureau received nearly 400 entries for the 2020 Photo Contest from amateur photographers who are members of county Farm Bureaus.

The top adult winners took home cash prizes—$1,000 for the Grand Prize photo; $500 for First Place; $250 for Second Place; $100 for Third Place: $50 each for Honorable Mentions. Winners of the Budding Artists category for photographers age 13 and younger earned $250 for First Place and $100 for Second Place, sponsored by the California Foundation for Agriculture in the Classroom.

All the winners shared something else: seeing their photos in print.

Ruiz, who works as a farm mechanic, was driving on Aug. 16 when he saw a foreboding cloud moving in over farm fields in Salinas.

“It started getting black. It’s a wildfire,” Ruiz recalled. “I pulled over at one of our romaine lettuce fields and I grabbed the picture. It was nice and clear and sunny, and, next thing you know, that great big ol’ plume of smoke was over the Salinas Valley.”

LaGrande is an agriculture communications major at Cal Poly San Luis Obispo. Her family has a rice and almond farm in Colusa County, and she was at home in the early evening with her twin sister, Theresa, when this striking photo op presented itself.

“We were out riding the horses, practicing roping and just getting out and enjoying the sun,” LaGrande said. “I snapped the picture as the sun was setting.”

Sollecito is also a student at Cal Poly San Luis Obispo, majoring in agricultural business. She was doing an Instagram takeover as part of an internship at a Salinas farm. Sollecito put her camera on the ground in a lettuce field and hooked it up to her cellphone.

“I actually took it of myself, so those are actually my boots,” she said. “I took a picture at the end of my workday, and I thought it summed up the hard work that all the agricultural industry puts in every day.”

Traphagan barely got her photo in: Her husband and son, both farmers and contract firefighters, had been fighting the massive North Complex Fire for 63 days and she was busy running supplies to them. They managed to complete their wheat harvest.

“I have an obsession with hands,” Traphagan said. “It’s amazing to watch them in moments of work, service and, in this instance, unity. We’re starting what should be the first on-farm flour mill. This picture is the beginning of our efforts to feed people. Their hands are full of seed that we hope to make into flour.”

Schulte has been farming avocados and managing a ranch for 47 years. He passes the Solvang Farmer Pumpkin Patch nearly every day and said he’s impressed how the owner changes it each year.

“He’ll take a blank field. All year long, it’s flat and there’s nothing in it. Come June, he plants the corn and then, almost in weeks, it gets waist high and he turns that into a maze,” Schulte said. “Then he grows pumpkins nearby. It’s an amazing transformation to turn this thing into a massive pumpkin farm.”

Sanguinetti’s family has taken their cattle to graze in the Stanislaus National Forest every summer for more than 100 years. Her 5-year-old grandson, Les, insisted on helping her carry saddlebags even though she told him they were too heavy.

“He’s just this little guy,” she said of Les, who likes to wear a cowboy hat and has been riding horses since he was 2. “He ropes just like a cowboy. He’s a tough little guy.”

Brimmer said they have phenomenal sunsets on their hillside cattle ranch near Beale Air Force Base. She and her husband, John, take their quads out late afternoons to check on the cows. Tina, a Black Angus, is a “really mellow, social girl” who always comes by to visit.

“We were out checking the cattle that day. The sun was setting, the grass was nice and green. It just looked pretty and she was as happy as a clam,” Brimmer said.

Alonzo, past president of her county’s Young Farmers and Ranchers group, shot this picture of date palms in winter with the snow-capped San Jacinto Mountains in the background.

A stray cat showed up at Perkins’ boyfriend’s ranch on the north side of the Sutter Buttes. The cat was skittish at first, so Perkins started feeding him in the old rice harvester, where he now hangs out.

“His name is Fireball because he kept running from place to place to hide,” Perkins said.

Laura and her family live on a few acres with some goats. She took this winning photo of her brother’s goat, Lucy. She said she got creative with the shot. “I really just zoomed in, edited it a lot and found out I really enjoyed the nose.”

Natalie, whose family was evacuated because of the Glass Fire that erupted just before the contest deadline, barely got her entry in. It was taken when she was walking with her parents in their neighborhood. How did she react to winning a photo contest at such a young age? “I screamed and the whole house shook!”