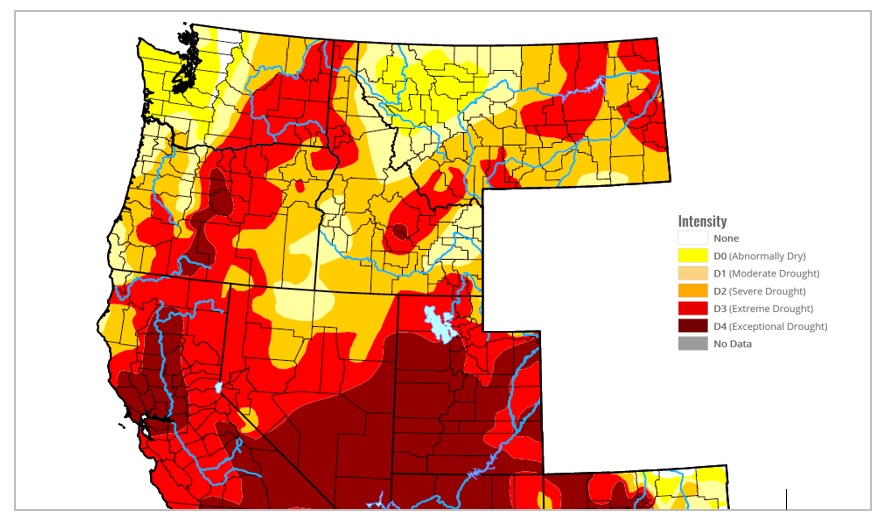 The most severe drought conditions to hit a half-dozen Oregon counties—several experiencing records not broken in more than a century.

Larry O’Neill of Oregon State University’s Earth, Ocean, and Atmospheric Sciences College described the situation as bleak and noted that Klamath, Deschutes, Crook, Jefferson, and Wasco counties are experiencing their driest or second driest springtime on record, according to KLCC. For many, he said, this year is among the top five or seven driest since 1895.

The lack of rainfall, which has left farmland brown and tinder-dry, could create an even more devastating wildfire season than last year, which saw the destruction of several Oregon communities.
Grant County is experiencing its driest summer in 127 years. Sixty-five percent of the county is under extreme drought conditions, and the lack of precipitation and access to irrigation mean low hay yields, high prices, and expensive costs for feed, according to the Blue Mountain Eagle. At least one rancher remembered a bad drought in 2001, but late rains helped alleviate it. But he said a record-breaking heat wave that sucked moisture from the ground and lack of precipitation is unlikely to ease the drought conditions anytime soon, perhaps making this year even worse than two decades ago.