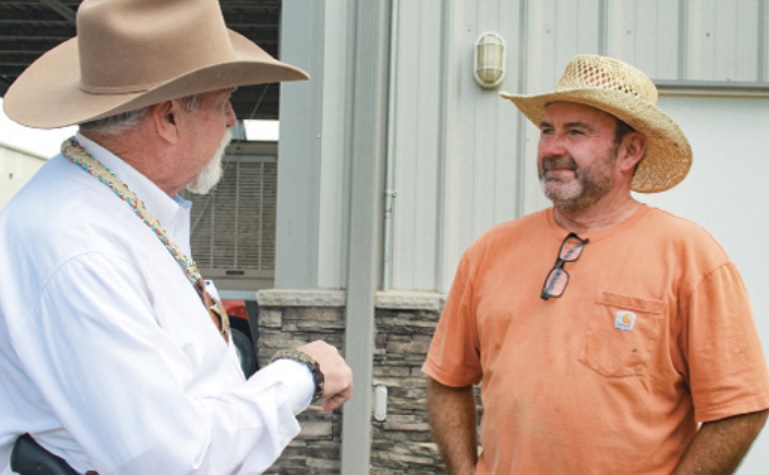 Photo: Merced County hay farmer John McLaughlin, at right, discusses rural crime impacts to his farm and custom-harvest operation with Merced County Sheriff Vernon Warnke. McLaughlin’s pickup, which was later recovered, was stripped of its catalytic converters and other equipment and tools, costing him about $10,000 in losses.

There aren’t many things that can throw a farmer or rancher off stride. But messing with their pickup can seriously disrupt their life and work.

This is what happened to Merced County hay grower John McLaughlin. A thief stole his truck, which was packed with equipment and tools, and also ripped off vehicle components increasingly prized by criminals.

“They stole catalytic converters,” said McLaughlin, who also operates a custom harvesting business. “They stole a portable hydraulic pump out of the back, a high-lift jack and spare tire, two-way radios and a handful of tools.”

McLaughlin’s ride was later recovered. But he said, “The overall loss is probably a $10,000 ordeal, not to mention the downtime to make numerous stops from an exhaust shop to a body shop, to shopping for the parts.”

The theft of catalytic converters, an integral part of a vehicle’s exhaust system, is on the rise and a growing problem statewide, among other property crimes impacting farmers and ranchers, authorities say.

The catalytic converters and equipment weren’t the only items stolen from McLaughlin. He also lost valuable time for harvesting and making a living.

“If we have one rig down or something’s been ripped off, it just puts us behind, and we have to work longer hours to get the job finished,” he said.

Sziraki said what catalytic converter thieves are looking for are the precious metals inside, such as platinum that they’re coring out and selling to recyclers for cash.

State law requires that recyclers hold catalytic converters for at least three days. They must maintain records for two years, and those selling to recyclers must provide a California driver’s license or photo ID, and a signature, Sziraki explained. Despite these requirements, he said, it is often difficult to connect a converter back to the owner unless it is marked, such as with a vehicle identification number.

The majority of the work happening at his shop, he said, is repairing vehicle damage caused by thieves going after the metals inside the converters.

“Catalytic converter thefts are the new copper wire (theft). They found out that they can get a soft target and can cut this converter off in 3 to 10 minutes and be gone and make anywhere from $50 to $500,” Hausmann said, noting that repair costs range from $600 to $3,000. “I just feel so sorry for these (affected) people. I have put more stolen converters on in the last year and a half than I have in 43 years of being in business.”

Sziraki pointed out that when suspects are taken into custody and held accountable, “this is when farmers see a reduction in the incidences of thefts happening on their farms. It reduces it tremendously.”

But this is not happening, McLaughlin said, adding, “Once thieves are cited for these property crimes, they go back and do the same thing that afternoon, which is pretty sad.”

Merced County Sheriff Vernon Warnke said, “We’ve just got all kinds of issues going on that just seem to be nonstop.” He said perpetrators are identified and arrested, but district attorneys too often fail to prosecute.

“It falls apart after law enforcement is involved and gets to where it goes to the district attorney and judiciary, and nothing is done. We catch the suspects and they’re not even filing on them,” Warnke said. “We’ve got to do something that’s different, because it’s not working the way it is right now.”

“We’re doing everything we can to prosecute these cases fully. We’ve devoted deep attention to agricultural crimes, but it’s frustrating to folks when the person who got arrested is walking around their neighborhood just a week or a day later,” Lewis said.

One issue, she said, is the Legislature is focused on violent crime, and property crimes are no longer treated as seriously under the state penal code.

“At this point, (property crimes) no longer generate a local prison sentence, which means that if an individual is found guilty of a felony and if they are sentenced to prison, they’ll go to the county jail,” Lewis said. “The normal procedure for property crimes is for the individual to be released through the sheriff’s supervised release program or released on their own recognizance.”

“Each district attorney has different guidance as far as what they’re telling their prosecutors to go after,” said Stuhmer, president of the California Rural Crime Prevention Task Force. “As law enforcement, we operate under the guise of probable cause to make an arrest, whereas the district attorney’s office has to operate under without a reasonable doubt, and so proving some of these property crimes is getting harder and harder to do with the legislation that’s in place in the state of California.”

With prosecutions unreliable, farmers are being extra vigilant to guard against the thefts. They’re communicating with each other to be watchful about anything suspicious.

Hilmar dairy farm manager Steve Belo, who co-founded Hilmar Farm Watch, a neighborhood watch program that now has 6,400 followers on Facebook, said rural crime has picked up. A few weeks ago, the group posted a reminder for the community: “Thieves are hitting our area every night. Bolt it down, lock it down, weld it, do whatever it takes to protect your farm.”

“There was like a two-week period where it was almost like every other day of people stealing things,” Belo said. “We’ve been victims of theft I don’t know how many times, including tractors or copper. I’ve made dozens of reports for my own farm and my boss’ farm. It’s just crazy.”

Belo also noted the frustration by affected farmers, adding, “Nothing is really happening to these criminals; they just get a slap on the wrist. The cops can’t do anything. Their hands are tied.” He said all they can do until something changes is to keep looking after one another.

“We are always looking out for each other,” Belo said, “to see if we see anything suspicious.”