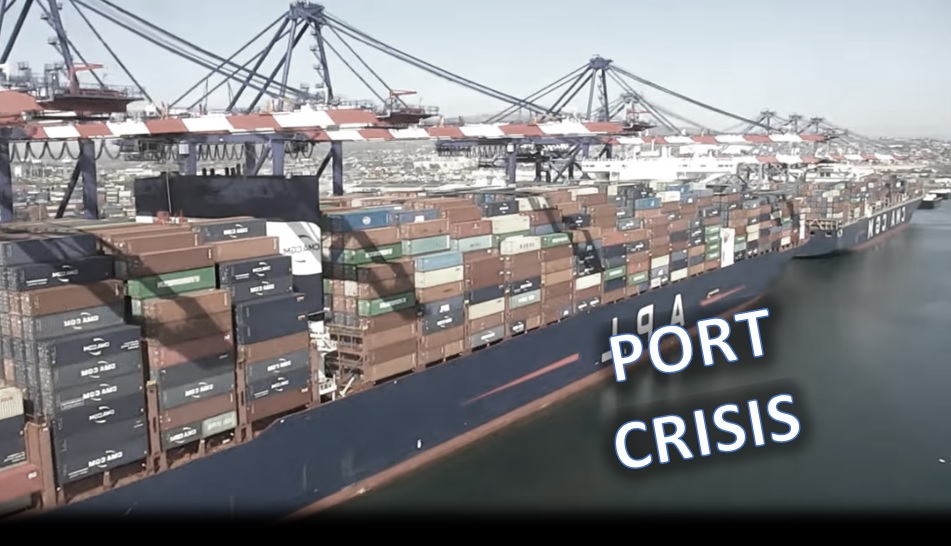 As a major gateway for California agricultural trade, West Coast ports remain among the least efficient in the world, according to recent data. Now those clogged ports threaten farmers’ ability to get products to market—and could undermine their standing as reliable suppliers.

In a study published last month, the University of California, Davis, estimated California farmers lost $2.1 billion in export sales between May and September last year due to container shortages, port congestion and other inefficiencies.

That economic hit to California agriculture exceeds losses incurred in 2018 from the U.S.-China trade dispute, according to the study.

“In terms of impact, this is the most disruptive issue we have faced in years,” said Roger Isom, president and CEO of the Western Agricultural Processors Association and California Cotton Ginners and Growers Association.

The UC study estimated an overall drop of 17% in the value of containerized agricultural exports during the five-month period. Tree nuts, wine and rice saw the sharpest average trade declines, with losses totaling $520 million, $250 million and $120 million, respectively.

But those numbers do not reflect total lost revenue, Isom noted.

For example, the study did not consider “the complete disaster” California agricultural exporters faced from September through mid-December, said Jim Zion, managing partner of Meridian Growers in Fresno, which exports tree nuts. That’s a critical shipping period for the state’s new nut crops. He estimated about 80% of Meridian’s shipments during that time were delayed because they could not get bookings or space on vessels.

Exporters face such urgency getting their shipments to overseas customers that they’re at the mercy of ocean carriers, which now are charging unfair extra fees that are “completely unnecessary,” said Jessica Davis, sales and shipping manager at Sierra Valley Almonds in Madera. She said she ends up paying the fees because not doing so would further delay cargo while incurring additional demurrage charges and other penalties.

“It erodes our ability to make money,” Davis said. “We have no power because if we fight back or ask for an explanation, it might take three days to get anyone to respond. They literally cannot or will not give you answers.”

Americans’ increased online shopping and seemingly insatiable appetite for imported goods have led to a surge in demand for empty shipping containers in Asia. Freight rates from Asia to the U.S. have climbed so quickly that it has become much more lucrative to send containers back empty rather than wait for them to be loaded with U.S. exports such as farm products, people in the business say.

The UC study pointed out that recently, for every 10 containers coming from Asia with freight, about eight were sent back unfilled.

“That’s really upsetting,” Zion said, “because I could fill those containers with tree nuts and sell that product, bring that money in, pay wages, make a living from it, and we’re not able to do that.”

Freight costs have soared by as much as 50%, he said, due to increased rates and the need to reroute shipments. Because of contractual obligations, he said he has no choice but to absorb the additional costs. He’s also having to tell customers he can’t guarantee their orders will ship on time.

If port problems persist, Zion said he fears his customers will look to competitors such as Iran to buy pistachios and Spain and Australia for almonds.

“Once a customer changes suppliers, it’s awful difficult for them to change back,” he said. “We don’t want to lose them, but right now, we have no control over the shipping issues.”

The ongoing supply-chain gridlock is eroding the competitive edge of California agriculture in the world market, with negative impacts on the quality of perishable farm exports, said Chris Crutchfield, president and CEO of American Commodity Co. in Williams, an exporter of California rice.

“Our reputation in California as a reliable supplier of high-quality and safe food products has always been our advantage,” he said. “We’ve never been able to compete on price alone.”

Isom said even though there have been “rumblings” about efforts to find more space to store containers and to increase port operating hours, “there has been no improvement in the movement of ag exports whatsoever.”

The inefficiency of California ports has not been a secret. The annual Container Port Performance Index by the World Bank, which looks at 351 ports, ranked all three major California ports near the bottom: the Port of Long Beach at 341, Los Angeles at 337 and Oakland at 334. That’s far behind most ports in developing countries and those on the East Coast.

“We didn’t see this coming because we know that our infrastructure is run down, but nothing seems to be done about it,” he said. “I believe it will take a long time to fix.”

Zion said exporters have known about the ports’ inefficiencies for years and have been calling for a fix, but how to do it is “the big question mark.” Having been to ports around the world, he noted most of the largest ones are completely automated.

“You don’t see a lot of people running around; you see a lot of equipment,” he said. “They’re very efficient, and they move product in and out of these ports. You go to California—not even similar.”

He agreed that fixing the state’s port problems will not be easy and will take time, as it requires updating infrastructure and adopting technology to automate.

“Automation to some people means loss of jobs. That’s going to be the biggest (issue),” Zion said.

With expectations that port delays will continue at least through this year, agricultural exporters say they’re trying to adapt. Rice exporter Crutchfield said he has seen many other California agricultural commodities besides rice use break-bulk shipments and other transportation means.

Zion said his company will pivot more to the domestic market and look to ship more product out of Houston or the East Coast. It may end up storing inventory in warehouses overseas, which he said “carries its own unique risk.”

“We’re going to just have to manage our way through it,” Zion said.

(Ching Lee is an assistant editor of Ag Alert. She may be contacted at [email protected])