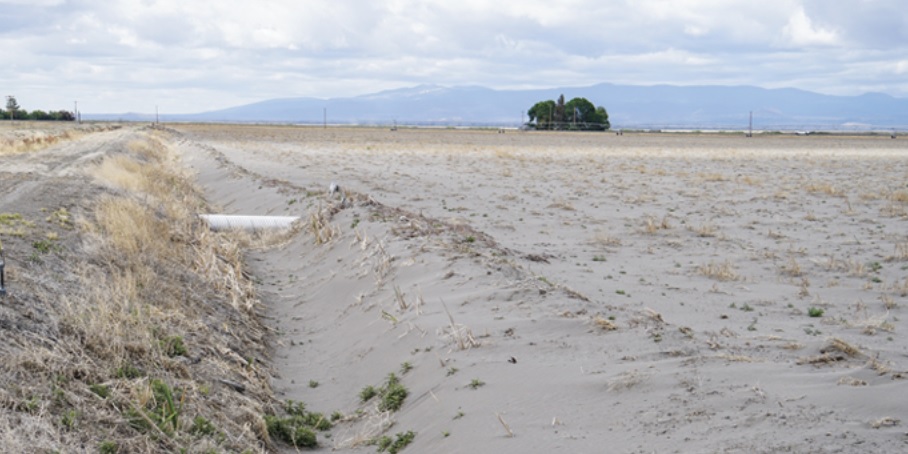 The drought affecting the West has impacted more than water supply for farmers of many field crops in the Klamath Basin. This fallowed farm in Tulelake shows displaced soils caused by spring winds. Photo/Rob Wilson/University of California Intermountain Research and Extension Center

Growers in the Klamath Basin have struggled with water-supply shortages for years, but this spring brought additional challenges: cold and wind. That made it more difficult for growers to get crops planted, as wind dried up fields almost immediately.

Dry conditions due to drought and fallowed fields led to dust storms.

Many of the region’s renowned field crops such as potatoes, garlic and onions are under contract. Without water, some growers were unable to fulfill their contracts and have lost them permanently.

The water situation is changing what and where growers plant, said Scott Seus, owner of Seus Farms in Tulelake.

“If you’re growing a row crop, you’re having to put that in an area where it can have some certainty of groundwater,” Seus said.

Farmers in the Klamath Basin are getting 15% or less of their allotment of water from the U.S. Bureau of Reclamation through the federal Klamath Water Project.

“We’re talking about a minuscule amount of water,” Seus said.

The sitution is forcing growers to plant where they have water all season long. Seus is planting row crops on lands he owns or rents with well water. He also grows permanent crops, but he said, “We only planted our permanent horseradish crop where we can have well water.”

Due to uncertain water deliveries from a drought in the early 1990s, Seus began drilling wells in 1992 “to ensure the production on his crops.”

While he farms in California and Oregon, he only uses well water on his farmland in California, where an executive order by Gov. Gavin Newsom prevents new farm wells from being drilled without approval from local groundwater sustainability agencies.

“We are mindful of the impacts that groundwater can have and try to operate our wells, being careful not to overdraft areas or create impacts for others,” Seus said. “We don’t want to end up with a dire situation here where we’ve exploited that resource, and then have no ability to pump next year.”

In addition, Seus said, other growers are facing severe impacts on federal lease lands, where there is no well water and only parched conditions.

Seus planted organic garlic this year that’s under well water and some alfalfa. For those crops, he said, “We’re in pretty good shape.”

On land that he has fallowed, he said, he still hopes to plant cover crops—if he finds enough moisture left.

Spring rain and snow in the Klamath Basin had some positive impact. “If you looked at the snowpack map, we were 141% for this date and time, but hydrologically for the year, we’re still not in good shape,” Seus said.

The wind has been challenging for growers in the Klamath Basin, which is also a bastion for wheat, rye, barley, triticale, grain and grass hay.

“The wind storms have definitely delayed planting onions, the emergence of peppermint fields, and it has blown out winter wheat crops,” Seus said.

Rob Wilson, director of the University of California Intermountain Research and Extension Center, said winds caused a tremendous amount of erosion. He said wind has led to “the drying up of thousands of acres of cropland, including the entire USFWS (U.S. Fish and Wildlife Service) refuge.”

Winds have been so extreme that road plows were needed to move the blowing soil off the roads, Wilson said.

“We’ve had several days this spring with 30-mile-an-hour winds that make the skies around the city of Tulelake and surrounding areas look similar to smoky days during wildfire season,” he said. “You can barely see across the street.”

There is also a lot of soil moving from one farmer’s field to another. That’s concerning, Wilson said, because it’s moving off your site.

“I think a big issue for Tulelake is we have 10,000-plus acres of U.S. Fish and Wildlife land that basically has no cover on it, and it’s extremely susceptible to wind erosion,” Wilson said.

“Last year in the lease lands and sumps when there was minimal water delivery, there was enough water stored in the soil that a bunch of plants grew and held the soil,” Wilson said.

In Tulelake, there’s very little vegetation growing on the lake bed and fields, so anytime the wind comes up, big dust plumes pick up reminiscent of the Dust Bowls of the 1930s, Wilson said.

“You’ve got some of the most productive soils here, and you’re seeing large amounts of wind erosion locally that is moving that soil and depositing it up into the foothills,” Wilson said.

The big wind storms also deposit soil back into Upper Klamath Lake, which may negatively impact water quality, Wilson said. “Just like a river that has sediment that flows into the lake or canal, this is depositing large amounts of soil with high organic matter into the lake,” Wilson said.

“The winds are dying down now,” Wilson said. “But we had so many really cold and windy days in April and May, it was pretty alarming how much wind erosion there was.”

(Kathy Coatney is a reporter in Bend, Oregon. She may be contacted at [email protected].)